While the hill politics is being governed by the rhetoric of development and Gorkhaland, we are yet to get good roads.

One of the most explicit examples happens to be the road that connects Darjeeling and Bijanbari. One thing to be considered carefully is that when we talk about the well-being of Darjeeling, it’s not only the towns of Darjeeling, Kalimpong and Kurseong that we should be concerned about, but it should also include the plights and miseries of each and every area (rural and urban) within the hills.

Bijanbari is the biggest block in the entire state of West Bengal, extending its reach from Bijanbari to Lebong and Pandam in Darjeeling, and it delivers a massive area of rural villages with a market. In fact, the villages of Bijanbari serve as the hub of vegetable farming, flooding the markets of Darjeeling influentially.

Bijanbari is now an emerging town growing at a dynamic pace every day, but then the road that connects Bijanbari with Darjeeling is in perils. What is more surprising is that even when the road has been in a horrible condition since years, it still remains unattended and only goes on to degrade every year.

Ashesh Subba, a local resident of Bijanbari, explains how the pathetic condition of the road hindered his regular travel to Darjeeling during his years of schooling there, often giving him a feeling of hatred towards the authorities and the administration. He says - “The apathy and indifference eventually forces you to live with the inconveniences and you don't even care to complain any longer. There were days when I would get offended when people called it the  Hajmola Road, but now it no longer matters.”

To analyze the issue further of administrative apathy, there are some serious concerns to look into – medical emergencies being one of them.

Bijanbari has only one small hospital, limiting its services to minor medical needs. Thus, in times of emergency, the District Hospital in Darjeeling stands as the nearest possible option for the people. If we could only make sure that the condition of the road wouldn’t put the lives of the patients in serious condition into risk, it would all be fine. Till then, we have an issue to think about. More to think about the frequent labor patients whose travelling through such roads could risk their lives along with their child’s.

It might be recalled that administrative apathy caused the collapse of British era bridge in Bijanbari leading to the death of 32 people, and over 100 were injured.

The vulnerable condition of the road puts a question mark to the system and authority. Who is going to own up for the price that the common people are paying due to the negligence and under performance of the concerned officials and people? Is it going to remain the same for the next few years or the next few decades? 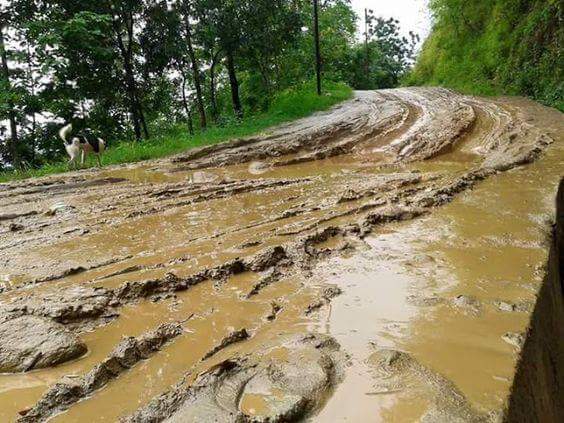