- October 23, 2016
Siliguri mayor Asok Bhattacharya sought intervention of chief minister Mamata Banerjee over the law and order situation of the town. Bhattacharya wrote a letter to Miss Banerjee yesterday in this regard. In his letter, the mayor also wrote about police inaction when he was harassed and humiliated by Trinamul Congress supporters on two occasions, two months ago. “The law and order situation in Siliguri and its adjoining areas is in a state of complete disarray. There has been a lack of police initiative. A working woman has been missing for the past two months and she could not be traced yet, while a tribal girl has been raped and murdered recently and the father of the deceased is an employee of Siliguri Municipal Corporation.

“These incidents highlighted the deplorable law and order situation in the area. The women are not feeling secure in the area. The incidence of other crimes has also gone up,” Bhattacharya said in the letter. He mentioned the incidents in which he was allegedly harassed and humiliated by Trinamul Congress activists. “Some hooligans carrying All India Trinamul Congress flags vandalised my chamber in my presence on 25 September. In another incident, Trinamul Congress supporters illegally barred me from entering the SMC building on 12 September,” he wrote in the letter. Bhattacharya alleged that in both the incidents, police had played the role of mere spectators. “Police had hardly taken any stepa. The Siliguri Metropolitan Police commissioner did not receive my phone calls, while I tried to contact him several times,” he said. The mayor and Siliguri MLA requested Banerjee to intervene personally and redress the law and order situation in Siliguri. (SNS) 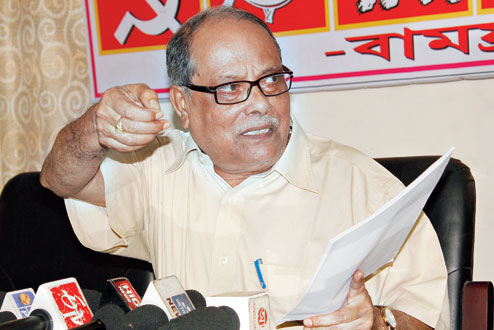