- October 24, 2016
No one should grudge Sikkim chief minister Pawan Chamling if he pleads for a peace bonus from the Centre. He certainly deserves one for taking care of the only insurgency-free border state in the entire North-east. In April 2003, after a four-day stay in Gangtok, then BJP Prime Minister Atal Behari Vajpayee sanctioned Rs 500 crore. It may not have measured up to Chamling’s expectation of Rs 3,000 crore and it was essentially a peace bonus for maintaining communal harmony in the state. About 75 per cent of Sikkim’s subjects are Sikkimese Nepalese, the rest being Bhutias and Lepchas. Mizoram is the only state that has earned peace largesse although, in the real sense of the term, it is yet to be fully insurgency-free, what with the Bru National Liberation Front demanding an autonomous council. Five months after taking over, Prime Minister Narendra Modi visited Sikkim. But he did not display any monetary magnanimity nor any such goodwill gesture. However, he praised Chamling for making his state fully-organic and also commented that “if a small state like Skkim could it, why not make the entire North-east an organic one”. Modi would have done well to chip in financially to further encourage Chamling in his task, but he did not think it necessary possibly because Chamling had once rejected the BJP’s offer for a seat-sharing arrangement to find a toehold in the state. Chamling is right to suggest his state has no rail or air connectivity. No one knows when the Pakyong airport near Gangtok, work on which started some years ago, will be functional. And he says the condition of the state’s main lifeline to Siliguri leaves much to be desired. When Mamata Banerjee was Union railway minister (2009-11) she sanctioned a railhead for Sikkim. This was to be ready by the end of this year. Little is heard about it now. Chamling’s poltical fortunes brightened after then chief minister Narbahadur Bhandari, in 1992, dropped him from his ministry. He has not looked back since.

Today, he is serving his fifth consecutive term and has no opposition in the 32-member assembly. If politial stability is any indication, he might sweep the 2009 poll as well. His emphasis on rural development has yielded rich dividends and he is determined to fulfil his cherished objective of providing every citizen a roof over his/her head and a square meal a day. The lone Sikkim member of Parliament recenly announced that the state would be poverty-free by the end of this year. One of the party’s poll promises is to make all Sikkimese citizens crorepatis by 2050. Can Chamling achieve this miracle without the Centre’s benevolence? All the same, he must be seen to be fulfilling his promises. Returning to Prime Minister Modi, in November 2014 he told the East India summit at Myanmar’s capital town of Nay Pyei Taw that after a careful assessment his government accorded high priority to turning India’s Look East Policy into an Act East Policy. He meant business. Soon enough, connectivity and strengthening of North-east infrastructure became the buzzwords. So far, only the southern states are said to have reaped the benefits of the policy that got underway in the early 1990s, during the tenure of Congress Prime Minister PV Narasimha Rao. The only significant event during his regime was the legalisation in 1995 of trade with Myanmar through Manipur’s border town of Moreh, 100 km from Imphal. In 2001, then Union minister Jaswant Singh visited Myanmar and inaugurated the 160-km Tamu-Kalewa Road, built by the Indian Border Road Task Force. Besides boosting trade, it is also part of the Asian highway that connects Yangon via Mandalay.

The plan to introduce a weekly bus service between Imphal and Mandalay, mooted during this period, is yet to materialise. According to a research paper presented at the international consultative workshop on proximity in connectivity held in Kolkata in February last year, the India-Myanmar-Thailand trilateral highway is expected to be ready this year. There is also the ambitious Kaladin Multi-Model Transport facility linking Indian ports with Myanmar’s Sittwe and a road/river project to connect Mizoram. The completion of this project has been delayed by at least three years. On the Indian side, much remains to be done to improve connectivity. There is no knowing when the Jiribam-Imphal rail link will be ready. Work on the Imphal-Moreh section is yet to be taken up and at this stage may not be ready even in the next two decades. The four-laning of the Dimapur-Kohima Road is expected to be ready in three years. If local entrepreneurial enthusiasm is not to be dampened, the state/Centre must also take note of the insecurity (read rampant extortions) along the Dimapur-Imphal-Moreh Highway, and also consider imposing a ban on the imposition of random economic blockades of national highways by tribals in their areas to highlight their demands/grievances. No one will grudge their right to protest, but must they hold the people of the Imphal valley to ransom? One blockade lasted as long as 101 days, and the Centre’s response to it was the airlifting of essential items. Almost every day there is an assault on the national highways. This is deeply disturbing. Besides, there is the need for stricter vigilance on smuggling of medicines that go into making drugs and also the trade in illicit arms from across the border. (SNS) 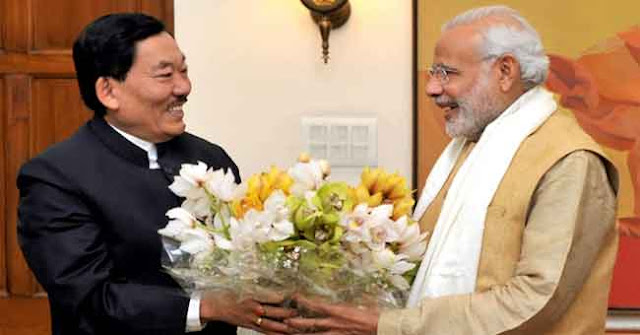