- October 24, 2016
Several Bodo organisations have called a 12-hour ‘rail roko’ stir today in support of their long-standing demand for the creation of a separate Bodoland state, a senior Bodo leader said. All Bodo Students Union President Promod Boro said rail tracks will be blocked at Basugaon (in Kokrajhar district) and Udalguri (in Udalguri district) in Assam to press the central and state governments on their demand. The 12-hour bandh which began at 5 a.m. today morning, in which over one lakh Bodoland supporters will converge at Basugaon and Udalguri. The protestors belong to the Peoples’ Joint Action Committee for Bodoland Movement (PJACBM), a conglomeration of civil society organisations, and National Democratic Front of Bodoland’s (NDFB) pro-talk faction. Movement of most of the up and down trains in Assam and other parts of the north-east region will likely be affected since these pass through the Kokrajhar and Udalguri districts.
“We have met Union Home Minister Rajnath Singh at least seven times and Minister of State for Home Kiren Rijiju at least 10 times after the BJP came to power in May 2014. It seems the government is only interested in delaying action on the legitimate demand of the Bodos,” Boro said. The ABSU leader said they had also reminded Assam Chief Minister Sarbananda Sonowal of the Bharatiya Janata Party of its poll promise on the matter in the past. “However, nothing has happened. We have failed to understand what the government wants? We have been raising our demands in a peaceful way but it seems the government has ears only for violence,” he said. ABSU on August 30 called for a five-hour blockade of the National Highways across Assam on the Bodoland issue. 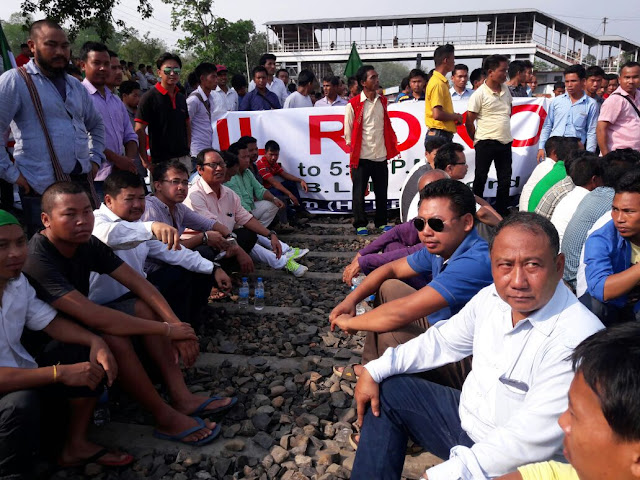