“Music is the effective medium through which one can share feelings with anyone around using no words or any particular language, where words fail, music speaks, ” says Ankit Rai, a violinist from Namchi South Sikkim.

Ankit Rai (24), a young lad of Namchi, South Sikkim is a son of Naren Rai and Bimla Subba. He completed his schooling from Modern Secondary School and West Point Senior Secondary School , Gangtok. He later completed his Bachelors in Music from Sikkim Central University specialized in Violin (Indian Classical). He is deeply passionate about playing the violin and creating good music and apart from it, he is always seen keen in learning new things in life. He loves photography, trekking and in addition, he loves playing guitar too.

Yougan Tamang from TNT- The Northeast Today met him recently and interacted. Our correspondent tried to delve into his passion, journey so far, achievements and aspirations. Below is an excerpt from the story shared by Ankit Rai.

“My father thought that teaching me to play violin was the only medium to keep me away from being restless when I was a kid and more importantly from the bad company,a violin,” said Ankit. According to him , his father is the first teacher who taught him to play violin thus diverting his mind towards music which was necessary as he thought for a kid to ease his life and relax up his mind from the regular studies. Initially with time, learning violin was mandatory routine to be followed at home but gradually Ankit started loving playing it and his interest soared high with time.
Ankit later joined one of the centre of Trinity College of London in India and started appearing for exams. Later in 2012 he completed his Grade 8 exam from the Trinity College of London. After the completion of the same, he started learning more to play violin from many reputed music teacher viz, Rudramani Biswakarma, Jeewan Pradhan, Gautam Lepcha and Jigmee Kaleon.

According to Ankit, his father has been the huge source of inspiration, his support has been with him through out, he added. Friends and the family members have also played a vital role in helping Ankit built his career in music today. Though, violin has been his first love but he is equally passionate about playing piano, guitar, mandolin which has made him a good musician of the juncture. ‘All these instruments are the big part of my life and it helps me to create good and soulful music’ said Ankit.

Ankit has participated in various musical events and concerts and has shared the stage with many renowned artists from Sikkim, Darjeeling, other states of India and Nepal. He has performed in various places of India viz, Jharkhand, Kolkata, Darjeeling and has been giving his extra meticulous performances in the various musical extravaganzas of the state of Sikkim too. He also recently performed in the huge events of Sikkim viz, ‘Nari- Save the Future’ and ‘Mukti- Say No to Drugs’ for which he received huge applauds and appreciations.

‘Music has no boundaries and no language, in fact, it is the universal language of mankind’ quoted Ankit. He had a great desire to teach and inculcate ideas and connotations of music in the hearts of young minds and souls thus he started teaching music from his early age of 22. ‘I always wanted to follow the footsteps of my father who also happens to be a musician and a music teacher’ said Ankit. With time he started giving private coaching for violin and piano to many students in Namchi.

Today, Ankit is one of the successful violinist and a pianist of Sikkim and emerging as a role model to many in the state of Sikkim. He is teaching music to many students of Namchi and around and simultaneously performs in various state and national events.He aspires to bring up more good musicians in Sikkim by teaching the students well and helping them understand the benefits of music and also enlighten them about the career in music.He mentions that his success is the credit of many motivation, inspiration, and support he has received from many people around for which he is immensely grateful. Ankit has also been a part of many social organizations and music-related organization. He has also been felicitated by many NGOs and social organizations of Sikkim.

TNT- The Northeast Today would like to convey the best wishes to him for all his future endeavors and we hope to hear more good things from him in days to come. 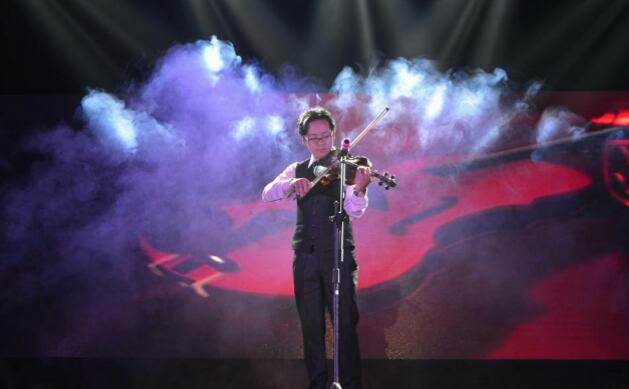