Pregnancy is supposed to be a delightful experience, especially for the mother-to-be. From the morning sickness to all the changes your body goes through during this phase to the baby's first kick, till the time the baby is finally born.

But for Margaret Boemer, her pregnancy gave her the experience of birthing her baby twice!

Margaret was only 16-weeks pregnant, when a customary ultrasound showed that her baby had a tumour growing on her tailbone - a medical condition called Sacrococcygeal teratoma (SCT).

The only way out, according to the doctors, was removal of the tumour through surgery, which required the baby to be pulled out of the mother's womb prematurely.

The Boemer's were evidently devastated by this news, but ultimately decided to give the baby a chance at life, because if they had decided otherwise, the tumour would have sucked more blood than the heart should and given rise to complications that could further impact the fetus.

According to a report in Nature World News, the Fetal Treatment Center said that SCT is more common in female babies. They are usually not malignant, but occasionally cause trouble before birth. SCTs that are largely cystic (fluid-filled) generally do not cause a problem for the fetus before birth, but SCTs that are mostly solid tissue, and has a lot of blood flow in it, can be dangerous to the fetus as it may suffer adverse effects.

Margaret's baby weighed only 583 grams when it was pulled out of the womb for 20 minutes for the surgical process. After the successful surgery, the baby was put back inside Margaret's womb for another 12 weeks.

On June 6, at 36 weeks and five days, LynLee was finally born. However, LynLee had to undergo another surgery eight days after her birth for the removal of the remaining parts of the tumour.

This makes LynLee the first baby to have been born twice! 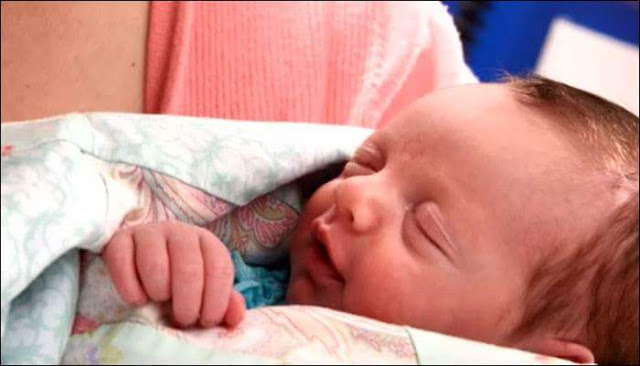