- October 04, 2016
This one of a kind Durga-like idol of Bengal Chief Minister Mamata Banerjee has created quite a buzz. It depicts all the work she's done in the past five years.
An idol of goddess Durga for the upcoming mega bonanza has been modelled on Bengal Chief Minister Mamata Banerjee in Chakdah, a suburban town in Bengal.
The idol, inspired by the leader shows her dressed in her signature white-and-blue-border, white sari and slippers. The 10-hand fibreglass idol shows the politician holding symbols of/indicating towards the various government schemes she introduced in past five years, while ruling the state. The 10 hands are attached separately to Banerjee’s statue, which portrays her with folded hands.
The interesting the backdrop of the statue has been designed according to a map of Bengal, marking out all the 25 districts of the state.
From the developments in the hilly regions of Darjeeling to the advancement in Rajarhat’s New Town, and other social schemes that she launched during her tenure – like Kanyashree – the idol showcases it all.
The 5.5ft model of Bengal CM will be inaugurated at Prantik Club on October 4, according to a report in the local English daily The Telegraph. What led to such idea was not clear; however, the picture has created quite a buzz.
The chief minister, who is quite busy with the impending Puja inaugurations at various pandals around the city, also drew the third eye at a club in South Kolkata on Mahalaya.
CM on Monday also released a song, ‘Prithibi Ektai Desh’ that she penned for “the ensuing Sharod Utsav”. So far, Banerjee has been on a puja pandal-opening spree, having already inaugurated over two dozen pujas.
Indian Express 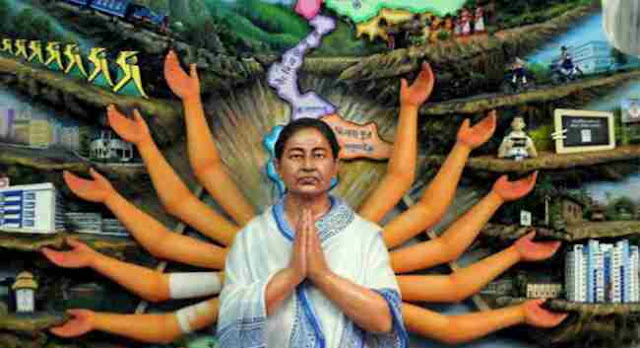 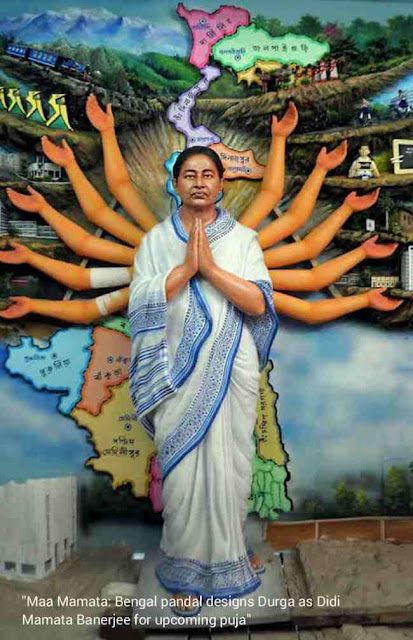