- October 18, 2016
This is the story of Aphe. She was born and brought up in Mon. She Sells Pani Puri and Chooski in the streets of Mon town.

She started her career as a teacher in a private school in Dimapur after which she battled with Cancer for 2 years. She is now Cancer Free and give all the praises to God. She said and I quote, “After winning the battle with Cancer I felt like I couldn’t stay at home doing nothing because God gave me a new life and I wanted to make the best of it”. She thought of starting a clothing business however looking at all of her friends struggle with it she decided it would be a dead end.
It was when she was in Dimapur she saw a non local selling Chooski and Pani Puri at Dobinala that she realized none of the Nagas are in this business and she would like to try her hand at it. She then went on a mission to learn the art of making chooski and Pani Puri. She observed the non local for two days after which he gave her his contact details. She then contacted him and he took him to his father who taught her all the basics to start the business. Aphe said, “His father was so kind enough to teach me everything. He told me to use a wooden hand planer to shave the ice block as it gives better texture and it is easier to shape them. After learning everything I could I got back home and tried it for days. I had cut my fingers countless of times but I was determined to perfect it.” She also added, “After I was confident enough, I invested Rs 20,000 to get table, an umbrella and an ice block to kick start my business.” She recollects her first ever flavors she used for Chooski to be strawberry and pineapple.
Like every business she too had her challenges. One of which was the delivery of the ice block from Assam. Most of the time the ice block would be melted by the time it reaches her or they refuse to supply because of the shortage of the packaging as the fish mongers also compete for the packaging. Inorder to overcome deficit because of this she invested Rs 18,000 in a freezer and now she makes 2 relatively smaller ice blocks for a day. She said that she no longer spends on ordering ice blocks. Other than this, the availability of the most popular flavor, Kala Khatta, is also not readily available. Since the schools normally open by 7am to 8am, she has to wake up by 4am to 5am or sometimes even 3am to get ready to open her stall for the school students are her best customers.
Her earnings per day stands anywhere at Rs 800 to Rs 2000. She mentioned that she is left with plenty at the end of the day because the amount she spends is very less compared to her earnings. She said that she can save up her earnings however she does not do it yet. She said, “God gave me a second chance in life so I want to do everything I can to help anyone and everyone who is in need”.
When asked about her future plans she mentioned that she plans to continue with her business and she is planning on bringing in chole and black tea for the winter in place of chooski. she is happy and has an option of either trying to get a stable job or to continue with business and build a franchise where Many youths can be employed across Nagaland. We are inspired. We wish her all the best. 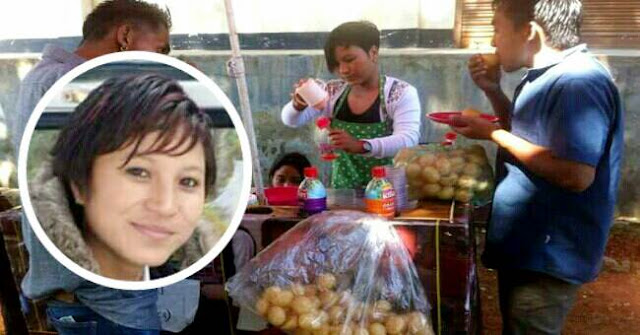