Rain in Darjeeling and Siliguri yesterday stranded around 800 tourists in north Bengal whose flights did not land in Bagdogra.

Many travellers who had gone to Darjeeling were forced to spend an entire day indoors because of the showers brought by the south-west monsoon.

Traffic moving towards Sikkim was slow as NH10 that connects Bengal to the hill state had partially sunk at one point yesterday evening.

"On some stretches of NH10, necessary arrangements have been made to ensure that traffic can pass. According to officials of the state PWD's NH division, the primary job was to open the road. It was done yesterday.... Although the road is open, equipment has been kept so that debris can be removed," Anurag Srivastava, the district magistrate of Darjeeling, said.

In Bagdogra, of the 15 flights that were to land, only eight could. "The other seven flights were cancelled because of inclement weather," Rakesh Sahay, the airport director, said.

Four flights to Delhi, two that were to take off for Calcutta and one that would have flown to Guwahati after picking up tourists from Bagdogra could not land because of the heavy rain between 2pm and 4.45pm. After 4.45pm, planes don't land at Bagdogra as there is no night-landing facility.

"Visibility was good in the morning hours but as it started raining in the afternoon, it dropped sharply," Sahay said.

"Nearly 800 passengers have been forced to stay put in Siliguri because of the flight cancellations. Most of them are tourists and have come down from Gangtok and Darjeeling. There were traffic disruptions because of the rainfall but most of them had somehow managed to reach the airport," Samrat Sanyal, the executive president of Eastern Himalaya Travel and Tour Operators' Association, said.

P.K. Bose, a resident of Delhi returning home with his family from Darjeeling, said he was supposed to take a flight to Delhi but would have to stay in a hotel tonight. "Tomorrow, we will try to get an early flight if operations become normal. We are keeping our fingers crossed," Bose said.

Phansidewa block in Siliguri subdivision has suffered crop loss because of the rainfall. "Preliminary reports suggest that crops like pineapple, paddy and different vegetables have been damaged in around 625 hectares. Also, several roads constructed under the Pradhan Mantri Gram Sadak Yojana have suffered damage.

Forecast: Rain or thundershowers in the next two-three days in Darjeeling, Sikkim, Jalpaiguri, Alipurduar and Cooch Behar

Why the rain: Met office sources said the southwest monsoon was still steady over Sikkim and sub-Himalayan Bengal, causing the rainfall. In the past 24 hours, from 8am on Wednesday to 8am on Thursday, heavy rainfall was recorded in places in Darjeeling, Jalpaiguri, Cooch Behar and Alipurduar 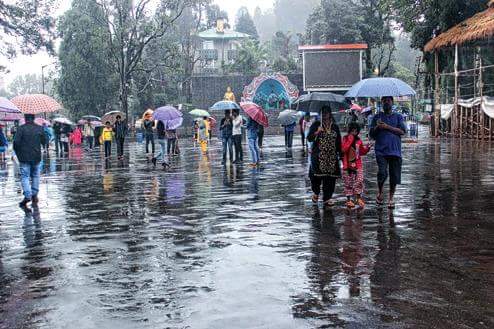