- October 03, 2016
The Gorkha Janmukti Morcha-controlled GTA is organising Durga Puja for the first time in its four years of existence.
The Puja (Dashain) in the hills, unlike in the plains, starts from the day after Mahalaya, and GTA chief executive Bimal Gurung has been making daily visits to the Puja at Chowrasta since Saturday.
The hill body is organising puja not only in Darjeeling but also in Kalimpong, Kurseong and Mirik this year.
Binay Tamang, the executive GTA Sabha member in charge of information and cultural affairs department, said: "The GTA is organising the Puja for the first time and there is no particular reason. Every year, we used to organise phulpati. But this year, we have decided to organise Durga Puja as well."
Some Morcha leaders said, being a religious person, Gurung wanted the GTA to organise Puja.
Phulpati is a unique custom of the Gorkhas in which they collect flowers, petals and other offerings like sugarcane from their homes and take them to temples to pay obeisance to Goddess Durga.
The flowers, leaves and sugarcane are wrapped in a red cloth - the colour symbolising the goddess - and carried in a decorated palanquin, which is accompanied by an ornate umbrella.
It is believed that people who pass underneath the palanquin would be absolved of their sins.
The phulpati tradition dates back to the days of Prithvi Narayan Shah (1723-1775) - the unifier of Nepal.
"This year, the phulpati procession will be taken out at 13 places across the hills. We will also videorecord the procession in which the culture of different communities is reflected and send it to the Centre to apprise it of our diversity. There is also the issue of tribal status for the hill communities," said Tamang.
The Centre is looking into the demand to grant tribal status to 10 hill communities.
The phulpati that is observed on Saptami, despite having some religious implications, is more of a social event in the hills. It is not only the Gorkhas, but Bengalis, Bhojpuris and Marwaris also take part in the colourful procession. The procession consists of famous mask dancers of the Newar community, lakhi, accompanied by people playing musical instruments like naumati baja (nine piece instruments), dhampu and madals.
" Phulpati is a symbol of the unity and uniqueness of the hills," said Tamang.
Unlike in the rest of India, where Dusshera and Durga Puja are largely confined to pandal hopping and meeting friends and relatives, Dashain in the hills is a more widespread celebration.
The GTA has also decided to hold cultural events from October 21 to 27 at Chowrasta every evening.
Telegraph, Pic: TheDC 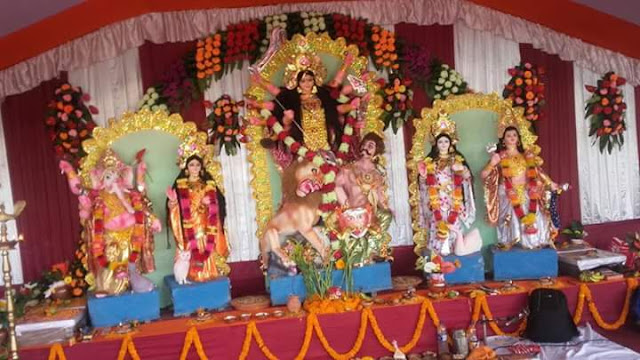