No one has been arrested yet.

The seizures came two days after an AK-47 rifle, a rhino horn and 46 rounds of live cartridge had been recovered from a village near Jaldapara forest and four suspected poachers arrested.

Yesterday afternoon, foresters got information that a gang of poachers could enter Volka forest in the Buxa Tiger Reserve.

Volka range is close to the Assam-Bengal border.

Foresters reached the area and when a gang of 40-50 suspected poachers entered the area, the staff chased them away.

The gang crossed the Sankosh river nearby and entered Assam leaving behind the arms and poison.

According to foresters, the gang members had at least 10 country-made guns with them.

Ujjwal Ghosh, the field director, Buxa Tiger Reserve, said: "Around 2pm today, a gang of around 50 poachers entered the Volka range of Buxa Tiger Reserve. Although the gang members escaped, they left behind a country-made gun, gunpowder, poison, bows and arrows."

He added: "It is easy to cross the Sankosh river (from the Volka forest) and reach Assam and the gang members did the same."

Volka range is in the East division of the Buxa Tiger Reserve.

According to forest sources, poachers mainly target elephants, wild boars and deer (barking deer, sambal and spotted deer are found in the region) in the Buxa forest.

Sources said, in the past two years, eight elephants had been killed by poachers in Buxa forest.

A forest officer said, along with Volka, Balapara and Ghoramara areas in the BTR, were also sensitive as the places were close to Assam.

The four suspected poachers who were arrested from Uttar Mendabari village near Jaldapara on Tuesday night will be produced in the court tomorrow again, police sources said. 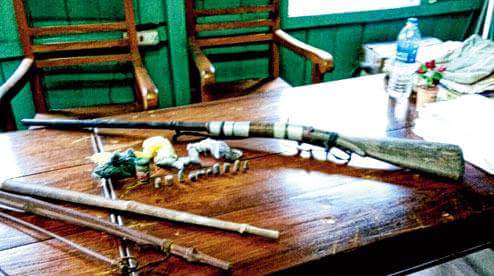