A case of role reversal over land played out near Siliguri yesterday where four families claiming ownership of a plot found support in the CPM, while the state government, which is averse to land acquisition, said the plot belonged to it.

The West Bengal State Electricity Distribution Company Limited (WBSEDCL) today said it took possession of 0.25 acres in the Matigara block on the outskirts of Siliguri near Milan More to make a power sub-station. The land is now a paddy field.

But the four families in Purba Karaibari, which is in Matigara block, claimed the land was had been theirs for the past 30 years and they had documents to prove their claim.

The Jalpaiguri district magistrate has rubbished the claim by the families.

This morning, officials of the district land and land reforms department and the WBSEDCL, along with 100-odd policemen, reached the area to take possession of a plot.

When they found paddy sown on the plot, they inquired who was farming there. The four families approached them and said they owned the plot. A section of officials, however, continued with their work of taking possession of the plot.

Among the people who had gathered there were Doma Sharma and Sushila Tamang, members of the Champasari gram panchayat and Matigara panchayat samiti, respectively. Both the bodies are run by the CPM.

Problems over land acquisition to set up transmission poles or sub-stations have been recurring since 2008-09 when Trinamul's land movement gained prominence. Though the size of the land parcels needed was small, Trinamul opposed any attempt at acquisition. After coming to power, the government sat on proposals of such acquisition, which inconvenienced the state utilities and affected the consumers. "The attempt at acquisition for a sub-station is indeed a welcome move and we hope such efforts are taken up all across the state. It's a bit late though," said a power department official, referring to the irony in the exercise.

The area is known to have supporters of both the CPM and the Gorkha Janmukti Morcha. Purba Karaibari is one of the three mouzas that a high-power committee set up by the state, had earlier recommended for inclusion in the GTA area.

Sharma, the panchayat member, said: "The claims by four families were not heard and the plot was fenced. If it is eventually proved the land is owned by these families, we will launch a movement against the administration's move to acquire private land in such manner."

A Congress leader in Purba Karaibari said earlier, Mamata Banerjee used to oppose land acquisition when the CPM tried to acquire farmland. "Now, it is the government of Mamata that is acquiring land or taking possession of encroached government land and it is the local CPM now raising protests."

Local leaders of the Morcha have supported the families. Hemant Gautam, a central committee member of the Morcha who was present at the spot, said the families had been given pattas for agriculture in 1991. "MP S.S. Ahluwalia had spoken with senior officials of the district. The families were assured if they genuinely owned the land, it would not be acquired," Gautam said.

Jiban Sharma, one of the land owners said: "We are not encroachers and yet the administration took control of the land today."

The other owners have identified themselves as Shibprasad Sharma, Tika Sharma and Naraprasad Sharma.

Anurag Srivastava, the Jalpaiguri DM, said the plot belonged to the government. "The land has been handed over to WBSEDCL for a power sub-station," he said. "When the proposal was finalised in April this year, there was no sign of agriculture there. As soon as the message of handing over the plot (to WBSEDCL) reached the area, a section of people sowed paddy on the land with the intention of grabbing it." 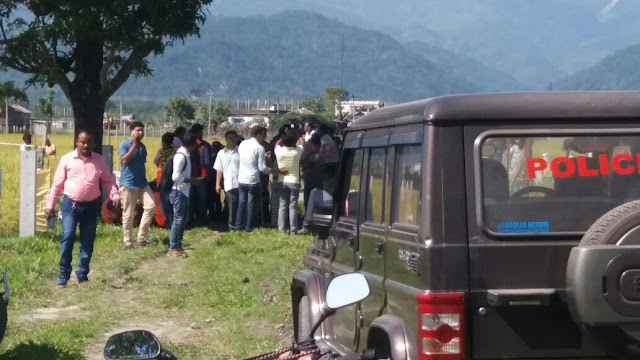 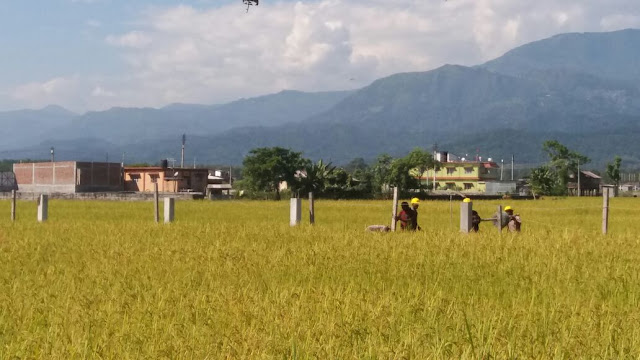