At 500 kilograms, is this 36-year-old the worlds heaviest woman?

Iman Ahmad Abdulati has not left her home for 25 years - since she was 11-years-old - because of her weight problem.

An Egyptian woman is believed to have become the fattest woman on the planet after her weight ballooned to 79 stone.

Iman Ahmad Abdulati, 36, from Alexandria in northern Egypt, has not left her home for 25 years because of her weight problem.

After years of desperate attempts to deal with the issue, her sister Chaymaa’ Ahmad Abdulati has now gone public with the problem in the hope of getting help.

Iman currently lives in the family home with her sister and mother.

Her family believe she suffered a stroke at the age of 11 which left her bedridden and piling on weight.

She needs help going to the toilet as she can no longer walk there herself.

According to El Arabiya, Iman was born weighing a staggering five kilograms.

She was diagnosed with elephantiasis - a parasitic infection that causes extreme swelling in a person's limbs and arms.

Relatives also say medics have previously stated her problem may have been caused by by a fluid retention problem meaning that large amounts of extra water are being retained in her body.

It is feared she may die if she cannot be moved to a hospital in Cairo for emergency surgery.

She never attended school because of her weight problem and is also said to have been affected by her father's death when she was young. 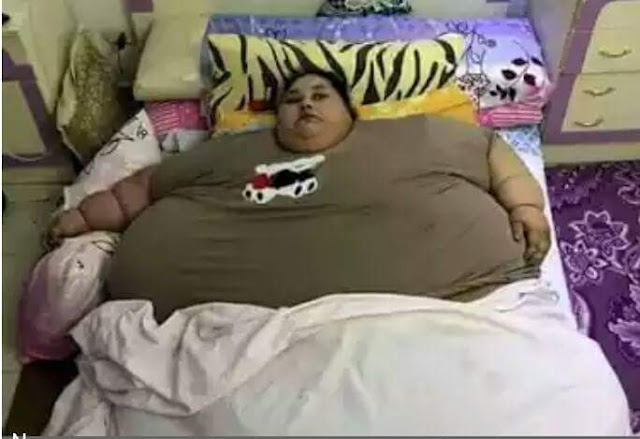