- October 24, 2016
The Kamrup (metro) administration’s drive against Chinese goods has hit traders hard. A majority of the traders dealing in Chinese toys, including firecrackers, decorative lights and lamps made in the neighbouring country, have suffered heavy losses ahead of Diwali. Sanjiv Tater (name changed on request), a dealer in electrical items on SRCB Road (Gate number 2), Lakhtokia, is already thinking about other options of livelihood. “The run-up to Diwali in the other years has always been profitable. But it has been the other way round this year. People are not buying Chinese products since the boycott call on social media. Business is down by about 90 per cent and while I have cut down on orders drastically, I still have Chinese goods worth over Rs 30,000 in my shop,” Tater, a member of the Lakhtokia Electrical Retail Traders Association, said. “Now it appears that I will have to shut shop once the festive season is over and look for other means to earn a living,” he said, pointing at the half-empty shelves. Sources here said Chinese goods worth Rs 10,000 crore are sold every day in India. But an anti-China sentiment, ever since the boycott of Chinese goods on social media after the Uri attack and China’s actions on the Tsangpo (as the Brahmaputra is called there), has hit sales substantially.
Kamrup (metro) deputy commissioner M. Angamuthu had through an order on Tuesday directed all circle officers to conduct extensive inspection of their respective revenue circle areas for necessary action against traders selling Chinese articles. “It has been observed that some traders are selling Chinese firecrackers and articles in the market that are totally illegal and banned by the government,” the order said. However, traders like Tater said Chinese goods need to be blocked by authorities at source itself. “We have not been given any breathing time this year. Our stocks were procured a few months earlier, prior to the escalation of tension post-Uri. The district administration’s drive has further dented any prospects of sale in the days ahead of Diwali,” he said. The areas comprising Fancy Bazar and Lakhtokia are hubs for Chinese goods, most of which also find their way to markets in Upper Assam. Sources said over the years Chinese items have had more takers as they are cheaper compared to branded items and more attractive as well. At Bulbul Market, a hub of low-cost fancy toys and imitation jewellery items, in Fancy Bazar, Subhash Agarwal, a trader who till last year dealt mostly in Chinese toys, now has goods made in India. “The market as a whole is down this year. Barring a few, the rest of the goods are all Indian. But I have not had a single buyer since morning,” Agarwal, who sources goods from Calcutta and Delhi, said moments before retiring for lunch. (Telegraph) 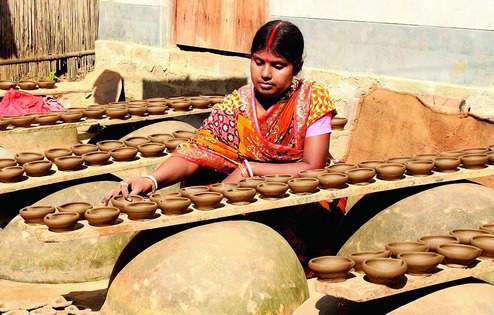