Thanks for Sharing : Robert Subba Family Has Been Found in Darjeeling

A plea for help from Delhi Police, requesting help with locating the family members of Robert Subba who died in Delhi, didn't go unheeded, thanks to all of your help and support.

Once we got the request, we looked up online and found that a Mr. Ram Arya who is currently based in Bhopal had been Robert's friend for a while, so we contacted Mr. Arya through his company. Mr. Arya was kind enough and informed us that Robert grew up in Allahbad and was based in Delhi for many years. He also told us that Robert had an elder brother Jupiter Subba who was also working in the Army.

With that information we started to search around for common friends with Mr. Jupiter Subba on Facebook. Thank God for the fact that Darjeeling is a small place, some of our team members had a few common friends, and with helpful tips from some of you - Smriti and Sibani in particular, we could finally trace the phone number of Robert's parents, who are residents of Gandhi Road above Goenka School.

We shared that info with Mr. Rajen Chhetry of Gorkha Youth and Students' Association of India - GYASA who called Roberts dad and informed him of his son's demise.

From there Mr. Rupesh Tamang who is with the Delhi police took over and he informed the Ex-servicemen Association in Darjeeling and also the samaj ko President where Robert lives, in order to coordinate the funeral arrangements.

Jt. Commissioner Robin Hibu of Delhi Police then informed Mr. Nirnay John Chettri of MARG, who also informed the parents and counseled the grieving family. Today two of his brothers will be traveling to Delhi to conduct the funeral, and Gorkha community in Delhi will be there to provide them with physical and emotional support.

Had his family not been traced, an organization formed for helping people from North East - Helping Hands would have done his funeral, but he would been buried as an unknown - Lawaris.

We are most THANKFUL to Ram Arya ji without whose help we would not have been able to trace Robert ko family. We also THANK Jt. Commissioner Robin Hibu of Delhi Police For North East Folks who has been the Guardian for all Gorkhas in Delhi. Mr. Sunil Tamang and Rupesh Tamang also with Delhi police deserve our kudos for taking the lead role in trying to trace Robert ko family. We are indebted to Smriti and Sibani who helped us connect to the family ultimately. GYASA has been one of the most dedicated organizations when it comes to dealing with issues confronted by our community in Delhi - all of GYASA members will always have our gratitude.

We are MOST THANKFUL to all of you who cared and shared... Thanks to your efforts, Robert will have a dignified funeral in the presence of his family members. 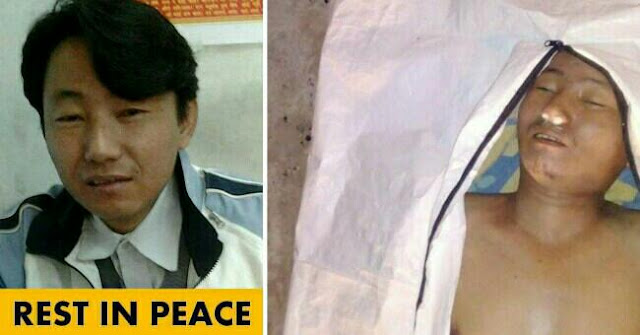