- September 23, 2016
The under 16 Girls Futsal Tournament 2016 kicked off at the Tiger five astro turf ground at Pentok. The tournament is being organized by the Sports and Youth Affairs department under the banner of Beti Bachao,Beti Padhao Abhiyan and is being conducted by North district football association(NDFA).
DM Karma R Bonpo graced the occasion as the chief guest accompanied by Sr SP Shammi Rai along with govt officials,students and members from the NDFA.
Under 16 Girls Futsal tournament is conceptualized and initiated by DM North Mr. Bonpo under Beti Bachao,Beti Padhao Abhiyan and has also provided the fund of Rs One Lakh to the department of Sports and Youth Affairs to create awareness amongst the girl child of the North district.
The tournament will be played amongst 16 school from Mangan and its surrounding areas namely Mangan SSS,Swyem JHS,Tibuk JHS,Manul SS,Naga JHS,Rangrang JHS,Singhik SS,Mangshila SSS,Namok JHS,NSA SS,Ralak JHS,Ringhim SS,Tingchim SS,Little Flower JHS and Pakshep JHS.
The finale will take place on 24.09.16 where the winners will be awarded Rs 10,000 along with trophy and certificates while the runners up will be handed with a cash price of Rs 5000 along with trophy and certificates respectively.
The tournament is mainly being organized with an aim to create awareness among the girl child of North district concerning their physical health and fitness. 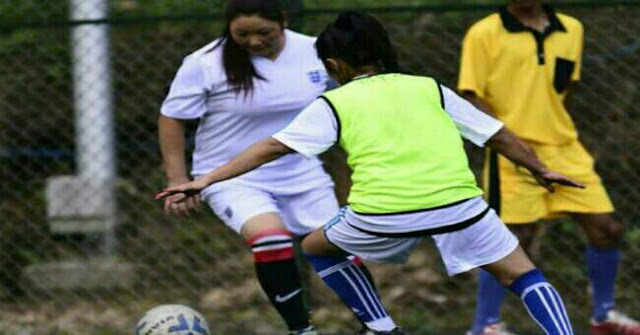