At least 18 people, including four women, were killed and about a dozen others injured on Tuesday when an overcrowded bus veered off a mountain road in Nepal’s Dhading district.

The accident took place at Lapang Phedi village, 120 kilometers west of capital Kathmandu, when the ill-fated passenger bus was on its way to Marpak from the district headquarters, Dhadingbeshi, police said.

A total of 18 bodies including 4 women have been retrieved from the accident site, a senior police official said, adding that bus fell some 300 metres down the road.

About 15 people were rescued from the accident site.

Six of the injured are said to be critical and they have been airlifted to the capital for treatment, he said.

Though the exact reason for the accident has not been ascertained, police have suspected that it could be the result of overloading and a steep road.

The other injured passengers have been rushed to nearby hospitals, police said.

Most of the passengers were reportedly Nepal earthquake survivors who had come to Dhadingbesi to collect the relief money.

Road accidents are very common in Nepal and occur mainly due to poorly maintained roads and vehicles. 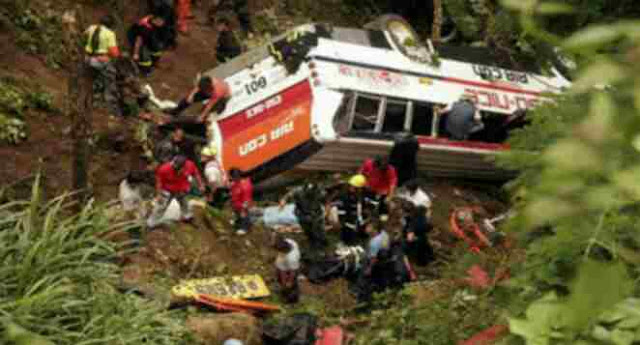