THEY MURDERED HIM - Alleges Family, After 61 Year Old Man Dies in Police Custody in Dooars

The death of a 61 year old Man Bhim Bahadur Chettri in police custody saw widespread protest by the locals at Nagarkatta.

According to sources, Bhim Bahadur Chhetri along with 6 others were arrested on the charges of gambling. However, within hours he was declared to be dead at the police station. His family members have called it "a 'murder' committed by the police."

Daughter, Rina Chettri stated, "we were planning to hold Puran from tomorrow so Baba had gone to get puja ko saman from the bazar... at around 4 PM we got news that he had died at the police station... when we arrived, we found that has deep injuries in his head and his temple...'

She added, "old people get toether and sometimes they play cards as time pass... what is wrong in doing so? the police arrested the old people on charges of gambling... why did they have to beat them up? Others told me that my father had begged and pleaded with the police officers beating him to stop, but they didn't... he didn't die... they murdered him... I demand justice"

Demanding justice for her were a large number of villagers who gheraoed the people station. Former MLA Joseph Munda said, 'more than the police the civic police are becoming a menace by the day, they are terrorizing the locals.'

Jalpaiguri Police SP Amitabh Maity said 'investigation is being conducted and we will only be able to comment once the investigations are completed."

Meanwhile, Minmaya the wife of the deceased is in a state of shock and is hoping that justice will prevail. 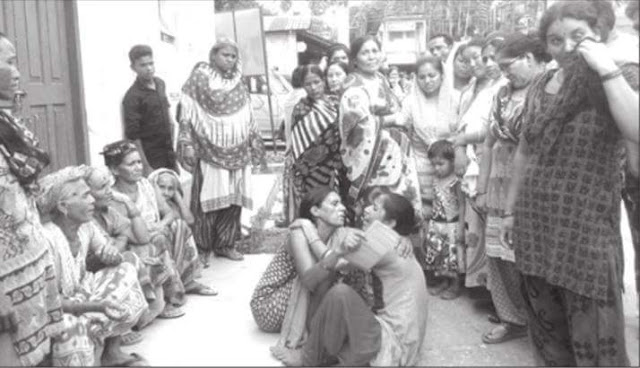