The Beauty of Kanchenjunga - Darjeeling 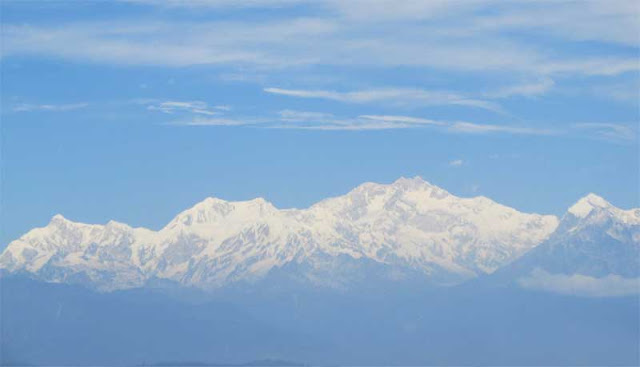 Kangchenjunga (Nepali: कञ्चनजङ्घा; Hindi: कंचनजंघा; Sikkimese: ཁང་ཅེན་ཛོཾག་), sometimes spelled Kanchenjunga, is the third highest mountain in the world, and lies partly in Nepal and partly in Sikkim, India.[3] It rises with an elevation of 8,586 m (28,169 ft) in a section of the Himalayas called Kangchenjunga Himal that is limited in the west by the Tamur River, in the north by the Lhonak Chu and Jongsang La, and in the east by the Teesta River. It lies about 128 km (80 mi) east of Mount Everest. Kangchenjunga is the second highest mountain of the Himalayas after Mount Everest. Three of the five peaks – Main, Central and South – are on the border between North Sikkim and Nepal.[5] Two peaks are in the Taplejung District, Nepal. Kangchenjunga Main is the highest mountain in India, and the easternmost of the mountains higher than 8,000 m (26,000 ft). It is called Five Treasures of Snow after its five high peaks, and has always been worshipped by the people of Darjeeling and Sikkim. Until 1852, Kangchenjunga was assumed to be the highest mountain in the world, but calculations based on various readings and measurements made by the Great Trigonometrical Survey of India in 1849 came to the conclusion that Mount Everest, known as Peak XV at the time, was the highest. Allowing for further verification of all calculations, it was officially announced in 1856 that Kangchenjunga is the third highest mountain in the world. Kangchenjunga was first climbed on 25 May 1955 by Joe Brown and George Band, who were part of a British expedition. They stopped short of the summit as per the promise given to the Chogyal that the top of the mountain would remain inviolate. Every climber or climbing group that has reached the summit has followed this tradition. Other members of this expedition included John Angelo Jackson and Tom.
Darjeeling