Paying Our Homage To The Veer Martyr Lt. Hav. Suraj Lama Of The Gorkha Rifles

PAYING OUR HOMAGE to the Veer Gorkha Martyr Lt. Hav. Suraj Lama Let's pay homage to the brave soldier of Gorkha Rifles Lt. Hav. Suraj Lama on his demise on 15th September 2016 at Udhampur Jammu Army Hospital. He died fighting with fatal accident he had on 15th August 2016 while he was going to serve his task on duty. He is declared as martyr. Thus, the Indian army today paid him tribute granting guard of honour to his funeral rites in Gangitiya tea garden. May his soul rest in peace. Long live Indian army! Long live brave soldiers. (Info via: Pradip Lama, DC) 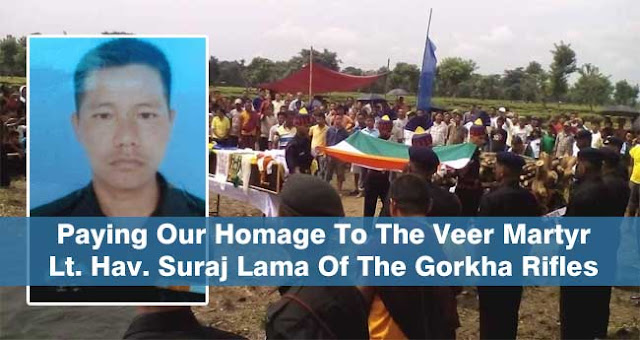