- September 23, 2016
A girl from the neighborhood was found dead in Dagapur tea garden near Salbari Siliguri yesterday morning without clothes with several marks on her body.
Telegraph has reported about it today:
The body of a 19-year-old girl with strangulation marks on the neck and without any clothes was found at Dagapur Tea Estate near here yesterday morning.
The teenager's father, who is a conservancy worker with the Siliguri Municipal Corporation, has filed a police complaint alleging rape and murder.
The girl's neighbours said she left home yesterday morning but never returned.
"She used to go to Salbari on the way to Sukna, around 5km from her house, where she was taking training in tailoring. She used to go there in the morning and come back home in the evening. Yesterday, when the girl did not return even till late at night, her family started looking for her. But she could not be found," Mukul Sengupta, a CPM councillor, said.
Yesteday morning, a body was found in Dagapur tea estate, around 3km from here, and the local people and garden workers informed the police.
Later, the girl's family identified the body.
"There is a road through Dagapur tea estate that meets NH55 near Salbari. We think the girl used to take that route to go for her training classes," a police source said.
Sources said the girl stopped going to school after Class IX.
A police officer said they suspect the teenager had been murdered. "There are strangulation marks on the girl's neck, which is why we suspect she had been murdered. It is true that the body had no clothes on it but we cannot confirm rape unless we get the post-mortem reports," he said.
The commissioner of Siliguri metropolitan police, C.S. Lepcha, said: "Our officers are investigating the case and they have spoken to the girl's family. The body has been sent for post-mortem. No arrests have been made so far."
The teenager has three brothers and two sisters, sources said.
Siliguri mayor Asok Bhattacharya, who is also a state secretariat member of the CPM, said the girl had been murdered.
"Such crimes against women have become common across the state. The girl was tortured and murdered. I have spoken to the commissioner of police and sought prompt investigation and arrest of all those involved in the incident."
He added: "We want to make it clear that if the police fail to solve the case soon and arrest the culprits, we will launch protests and demonstrations." 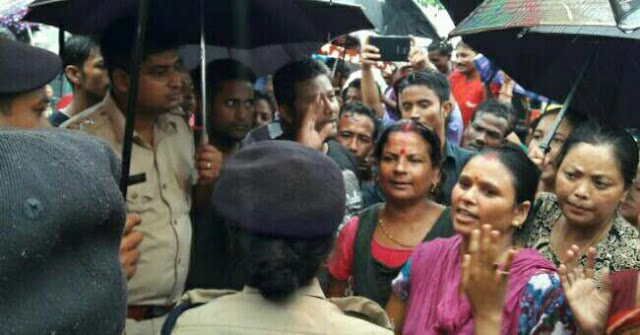