A mobile squad team of Forest department has busted the operation of illegal quarry at South Sikkim.

Five persons has been arrested yesterday after the team carried out a raid near Rolu.

A senior government official informed that the illegal quarrying was taking place reportedly since past many months.

' We received information from a reliable source on illegal quarrying, we reached the spot and confisticated one JCB,  two trucks, one stone crusher and around thirty trucks of stone chips, when interrogated a labor he confessed of illegal quarrying taking place' said the senior government sources.

The quarry was operational to an adjacent to government approved quarry ( of Dakman Chettri) so that no one could know of the illegal work.

In Sikkim mechanised quarrying is not permissible.

There are around 115 government approved manual quarries which means bo excavator or any form of machines could be used.

Every year the department  invites tender for the quarry work. Whosoever wins the bid is alloted the work.

The sources said, In the preliminary investigation it has been revealed that the stones taken out from the quarry was being used for a carpeting of Melli- Jorethang road.

The road expansion work has been given to Jorethang based RSK company which is owned by contractor Mahabir Agarwal.

The case is being handled by DFO South.

Agrawal is said to be not in Sikkim.

A case under different sections of Sikkim Forest Act has been registered.

An Exclusive Report by Nirmal Mangar 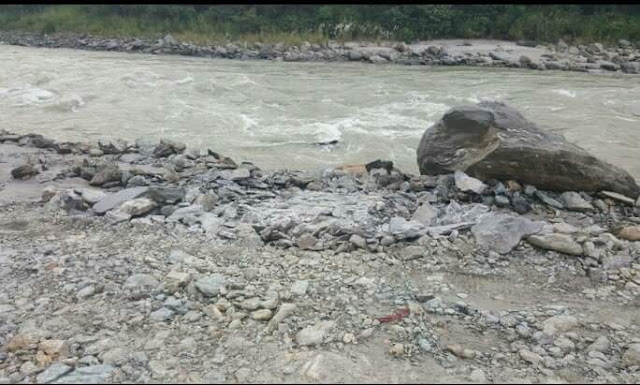