Police in Nadia's Ranaghat yesterday arrested a 38-year-old man for allegedly leading a job racket and deceiving many youths with promise of employment.

The police said Soumitra Chakraborty lured youths to pay up to Rs 25,000 after putting up advertisements in newspapers.

The police are looking for two youths believed to have helped Chakraborty in the alleged racket. The cops swung into action on a complaint by Diwas Dehl, an electrical engineer from Kalimpong who alleged he had paid Rs 25,000 to Chakraborty as "registration fee" after being promised a job in a private company.

Corresponding with TheDC, one of the victims who filed the case stated, "Following this advertisement in Himalaya Darpan, I applied for the job and also invested money in it. But it came out to be fake. So I took some step regarding this fake job, and filed a complaint with the police."

Police sources said Chakraborty and his associates had duped "several others" but declined to give a specific figure.

A police officer in Ranaghat said: "The trio would lure the youths with promise of jobs through advertisements in newspapers and persuade them to pay up to Rs 25,000. When they failed to deliver on their promise and the youths asked for refund, they would threaten them."

Dehl said he had first contacted Chakraborty in July after seeing an advertisement in a newspaper.

"I paid Rs 25,000 in three installments. Until I paid the money in full, they were very friendly. But after I gave them the last installment in August, they stopped taking my calls. One day, they threatened to kill me if I called again. It was then that I approached the police," he said.

The youth who filed the police complaint stated, "I also wanted to make people aware about this kind of advertisement which gets published everyday in Himalaya Darpan. I also feel that people from the plains are targeting the hills by publishing this kind of fake jobs in highly circulated news paper in Darjeeling." 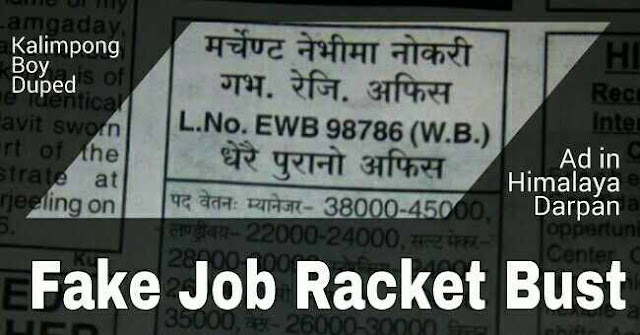