Bimal Gurung has decided to hold a public meeting of the Gorkha Janmukti Morcha's women wing in Kalimpong on Sunday, a day after Mamata Banerjee leaves the hill town, purportedly to show that Kalimpong is "a land of Gorkhaland lovers". The chief minister reached Kalimpong today and will attend a programme of the Lepcha development board tomorrow, followed by another one of the Tamang development board the day after. She is scheduled to leave Kalimpong on Saturday. In a written statement today, the Morcha president said Mamata was frequenting the hills, particularly Kalimpong, to "suppress the Gorkhaland voice" with the help of "some vested people who are trying to divide the Gorkha community into pieces" by forming development boards. Gurung went on to say: "In reality, Kalimpong is a land of Gorkhaland lovers. However, some people with vested interests are belittling Kalimpong. The person who is dividing the Gorkha community is being felicitated as the chief minister who wants good of the Gorkhas."
He called on "Gorkhaland lovers" to look into the issue with all seriousness and asked them to give a befitting reply. "The issue of Gorkhaland cannot be suppressed by temporary benefits. To spread this message to Gorkhas across India, the Gorkha Janmukti Nari Morcha has decided to organise a meeting at Delo on September 25," Gurung said. "The Nari Morcha members from Kalimpong should attend the meeting to demonstrate to chief minister Mamata Banerjee and anti-Gorkhaland forces the support for Gorkhaland," he added. Delo is 5km from Kalimpong. Even though Gurung had yesterday said the Morcha would win any election even if it was held now, his statement today, according to observers, suggests that he feels that the impact of Mamata's three-day visit has to be countered immediately. Many hope Mamata will make some announcements with regard to the creation of Kalimpong district during her stay there. However, a senior Nabanna official said: "Creation of a new district involves a lot of paper work. But no file regarding creation of Kalimpong has moved yet." According to sources, the personnel and administrative reforms department would first prepare the proposal and send it to the finance department before seeking clearance from the cabinet. "But nothing of that sort has happened," said a source. (Telegraph) File Pic 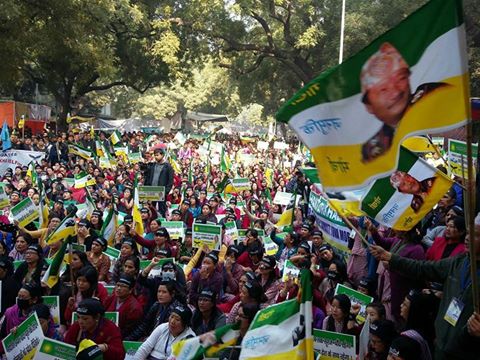