- September 22, 2016
All five of India’s hill railways make operating losses and the Darjeeling Himalayan Railway is no exception. Only five years ago its revenue was a mere 6% of running costs. Since then, and whilst costs have remained fairly constant, revenue has increased –thanks largely to the popular Joy Trains - to about  50%. Despite part of the line being closed for over four years passenger numbers have also risen sharply – up from 64,375 (2013-14) to almost 1,05,000. But there is still much more than can be done and the latest plans envisage nothing less than returning the DHR to profit within the next financial year. The three key strands to this are increased income, reduced costs and greater external sponsorship.
Increased Income
The DHR earns 70% of its revenue during the six months of the main tourist season. Of these earnings, the Darjeeling-Ghum Joy Trains contribute 77 %, the Jungle Safari 5 %, Charters 4 % and Scheduled Passenger Services and Others 14%.
Current plans include additional Joy Rides - up from 1 diesel and 3 steam to total 9 (3 Diesel & 6 steam) - including a premium service using heritage carriages, and lengthening the service trains from four to five carriages. All Second class carriages will be converted to Tourist Class with fares that are an average of the current First Class and Second Class on the regular service trains.
There will also be enhanced marketing of tourist specials, and charter operators are already being offered a booking service for the restored freight and open flat-bedded wagons. Several initiatives have been taken to restore wagon fleet, including the two remaining bogie vans currently being used for storage at Siliguri Junction. Commercial activity at stations will be increased by sales of souvenir items and licensing of retail outlets.
Reducing Costs
Overall the target is to reduce working expenses by 20%. Labour costs are a large part of this and
several initiatives are planned to reduce the current headcount of about 500 staff down to approximately 420. Outsourcing of non-core activities –such as electrical maintenance- is being considered. Multi-skilling of staff will be brought forward for increased flexibility, and the number of track gangs will be reduced but with larger, more mobile teams giving better productivity and a quicker response to any urgent situations.
External Sponsorship
Somewhat longer term, this includes initiatives such as co-branding advertisement of the line, private sector funding for specific heritage-related issues, and use of railway-owned land for budget hotels. (Clearly any additional advertisement boards must be sensitively sited –detracting neither from the view from the train or indeed of those wanting to photograph the trains).
Set against these objectives are a number of challenges:
The Landscape
The DHR runs through a fragile landscape and just how fragile has been demonstrated over the past few years. But this is far from a recent development. Since opening in 1881 there have been fifteen occasions when heavy rain or earthquakes have caused major disruptions of a month or more. In 1950, 1968, 1982, 1990 and 1998-9, services were stopped for over five months - with the DHR the innocent victim of events starting sometimes far from its tracks. (Despite the debate on climate change, the longest period with no disruption was surprisingly recent – the 11 years from mid- 1999 to mid-2010).
Key elements of preventative action are slope stabilisation and channelling water run-off away from slopes, but this will need the active engagement of other government agencies. (As just one example, 90% of the costs of repairs to NH55 and the DHR at Pagla Jhora were borne by the roads budget).
Heritage Conservation
The DHR is a 55 mile long World Heritage Site, so by definition it has 110 miles of sometimes inexact boundary, often treated with scant respect  by its neighbours. Encroachments edge ever closer to the tracks, unauthorised new level crossings to adjacent properties can even cause derailments, and line-side hoardings obstructing views threaten the attractiveness of the journey experience (particularly for the important Joy Train clientele). Implementation of the UNESCO – required Comprehensive Conservation Management Plan is recognised as an essential tool in a pan-agency tackling of the many issues involved. Progress in getting the funding in place and the UNESCO project team established has been delayed for many years, but the latest news is that this should happen very soon now.
Keeping the Steam Fleet Running
Although not listed by UNESCO in the World Heritage Site criteria (which covers only the DHR’s fixed assets) the world famous B Class fleet is seen as vital to the DHR, not just for the marketing image but for income generation. The latest plans rely on an increased usage of the steam locomotives and so an effective maintenance and overhaul programme is even more essential. (The earnings potential of better performance is very clear- restoring the Joy Train carriages from the current two to three or even four would bring a quantum increase in fare income for no extra running costs).

Conclusion
Provided these various threats can be managed, the future of the DHR is as bright –if not brighter- than at any time in its long history.
DC 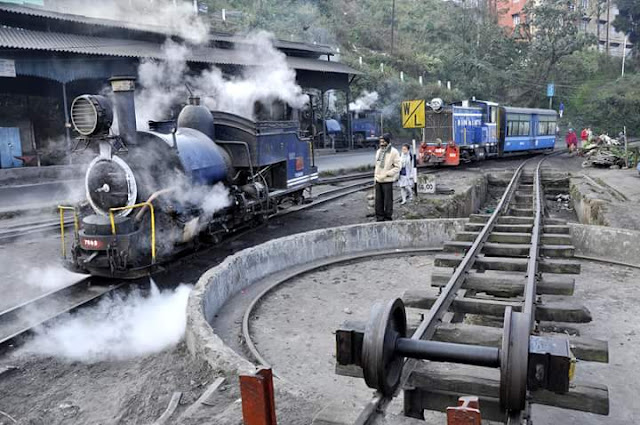