The Gorkha Janmukti Morcha is facing the first real challenge to its hegemony in the hills with the Trinamul (hill) Congress and the Jana Andolan Party (JAP) today hitting the streets to build public opinion against the Morcha's call for a 12-hour shutdown in Darjeeling on Wednesday.

The chain of strikes the Morcha had called since its inception on October 7, 2007, had never run into any resistance. Even a 44-day strike in 2013 has been a one-sided affair.strike has turned into must-win event for the Morcha because of the inroads Trinamul has been trying to make into the hills through a mix of poaching and development board politics.

Seemingly on the back foot, the Morcha was hoping to send a message through the bandh that its clout had not been affected by the Trinamul thrust.

However, Trinamul - whose local unit is already being referred to as Trinamul (hill) - has smelt in the bandh a chance to reassure its supporters that the party has garnered enough support to take on the might of the Morcha.

More pressure mounted on the Morcha today with Calcutta High Court declaring the shutdown "illegal". The court has indicated it might initiate contempt proceedings against the bandh-callers for violating a Supreme Court ruling.

The district administration has said it will take steps to ensure normal life is not forcibly disrupted tomorrow. One factor that the administration seems to be counting on is a latent resentment among several hill residents because the bandh has been called so close to start of the busy Puja tourist season.

"What we fear the most tomorrow is violence. This will spell doom for the industry and this would only increase the disenchantment with the Morcha," said a travel agent.

On the ground, multiple rallies rolled. Gautam Deb, the state tourism minister, took out a rally in Kalimpong while Trinamul supporters did so in Kurseong. In Darjeeling town, Trinamul cadres went around in vehicles, raising slogans against the strike call.

JAP, the party that was formed after a group broke away from the Morcha and which did not face any opposition from Trinamul and the GNLF during the Assembly polls, independently brought out a rally in Kalimpong to protest against the strike. Over a thousand supporters took part in the JAP rally in Kalimpong.

Bimal Gurung, president of the Morcha, who was on his way from Mirik to Kalimpong, where he will be camping during the 12-hour strike period tomorrow, hastily issued a statement over phone to the media in Darjeeling.

Gurung said the strike was also intended at "protesting against the tea garden managements' failure to disburse bonus at 20 per cent".

"Since the strike call is also in the interest of the tea garden workers, the 12-hour strike will take place. We, however, request everyone to maintain peace. There should be no violence tomorrow and there should be no damage to any government properties or any other properties for that matter," Gurung said.

Gurung had previously said "an atmosphere of an agitation" needed to be created. The apparent softening of his tone was seen as a sign that his party is finding itself on a sticky wicket.

Gurung had called the strike to protest the chief minister's alleged false claim that her government had provided Rs 4,000 crore for the "development" of the hills. Trinamul has turned the slogan on its head, saying the hills do not want a strike but are seeking details of the how funds had been used by the Morcha-run Gorkhaland Territorial Administration (GTA).

Yesterday, Trinamul sought to dent Gurung's claims that the strike call was for tea garden bonus. "Negotiations are on. The strike is not for tea garden workers. We will oppose the strike and will come out on the streets tomorrow as we did today,," said J.B. Tamang, president of the Trinamul-backed Darjeeling Zilla Tea Workers and Employees Union.

"The Morcha is concerned over its dwindling base. If by any chance the strike becomes a failure, it will be a major setback for the party. However, we are confident that the support of common people is with us," a Morcha leader said.

Trinamul has largely been able to make inroads through development boards. Mamata has formed boards for 10 hill communities and promised boards for Bhujel, Khas, Newar and Gurung communities.

"The development board has been Mamata's masterstroke. It is one of the single most important decision that has drawn the hill people towards the TMC," said a Trinamul district leader.

The gains from the development board were visible during the Assembly election results. The Morcha's winning margin in Darjeeling, Kalimpong and Kurseong went down by 68. 5 per cent, compared to that in 2011.

Binny Sharma, spokesman for Trinamul (hills), said: "The strike has been called because its support base has dwindled considerably and the hill people are attracted to Mamata's warmth towards the hill people."

The Morcha has also been hit by the crossover of same cadres.

A Morcha insider said Gurung took the decision to call the strike without consulting the party's central committee or other senior leaders. "It was a spur of the moment decision," said the insider who did not want to be named.

Roshan Giri, general secretary of the Morcha, appealed for peace in the hills and criticised Trinamul. "Democracy is being stifled in the hills.... A situation might arise soon when we will be jailed even for writing the 'Gorkhaland' word. We are being termed law-breakers for raising our just demand," said Giri. 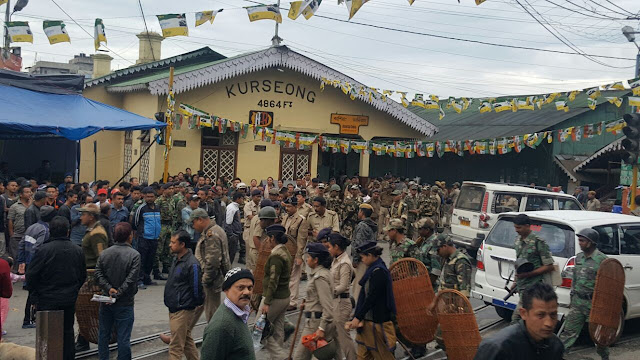