- September 08, 2016
The National Green Tribunal's decision to stop mining from riverbeds in north Bengal has had a ripple effect on the laying of two Asian Highways connecting India with Bhutan and Bangladesh as suppliers have run out of raw materials. The riverbeds in north Bengal are quarried for sand, stones and pebbles that are used for construction. In march this year, the green tribunal said permits should not be given out to contractors who mine the beds for construction raw materials. The case was started on the basis of a complaint by environmentalist Subhas Dutta. "For over a month, the work of building the roads under the Asian Highway project has halted in Darjeeling, Jalpaiguri, Cooch Behar and Alipurduar. This has happened because the contractor firms, which have been assigned to carry out the work, are not getting raw materials such as sand, stones and pebbles," Nirmal Mondal, the project director of Asian Highway-II, said today. There are two portions of the highway system, which will connect several south-east Asian nations, that turn through north Bengal. The Asian Highway II is a 38km stretch from Panitanki at India-Nepal border to Fulbari at India-Bangladesh border. This highway, being made by expanding NH31C, NH31, NH31D and some rural roads, skirts Siliguri. The other highway, AH48, will connect Jaigaon near the India-Bhutan border with Changrabandha near the India-Bangladesh border and will move through Alipurduar, Jalpaiguri and Cooch Behar districts. This is being laid by expanding a state highway, NH31 and NH31D. "Work on AH2 was on in full swing. The supply of sand, stones and pebbles stopped three-four months back but the contractors, who had kept a stock of such items ahead of the monsoon, could manage to continue work for some time. But in the past one month, the supply has halted and we had to stop the work," Mondal said. "As of now, only concrete work, that is construction of pillars, culverts and other works... are in progress. But the main work, that is widening the (national) highways to make the four-lane road has stopped," he said. Similar is the situation on AH48. Deepak Kumar Singh, the project director, said the road work stopped along the Jaigaon-Changrabandha alignment for the past one-and-a-half months. "Contractors are not getting raw materials and thus, they cannot carry out work at the sites. Once the foundations of the roads are done using these materials, there are series of other tasks," Singh said. Among other things which are done after the roads are built are construction of dividers, parking bays, bus stops and similar infrastructure, a source said. In the last hearing on August 18, the green tribunal said it was waiting for an affidavit required to be filed by the district magistrate of Darjeeling regarding steps taken to prevent illegal mining of riverbeds and some other environment issues. The case would be heard again on September 28. "If the impasse continues for some more time, the projects would be delayed and we would miss the deadline which is November 2017," Mondal said. "We had a number of meetings with officials of different departments of the state government where our officers spoke of the problems we are facing because of the halt in supply of these materials. We are keeping our fingers crossed and pinning on the assurance given to us by some senior officials that the state would resolve the issue by this month." Such delay, he said, might also lead to escalation in project costs. "In July, we have sent an additional estimate of around Rs 80 crore to the Centre as some additions and alterations need to be done on this stretch of AH2. We are yet to get an approval from the Centre.... Now if the project is delayed, the costs might escalate again," Mondal said. (Telegraph) 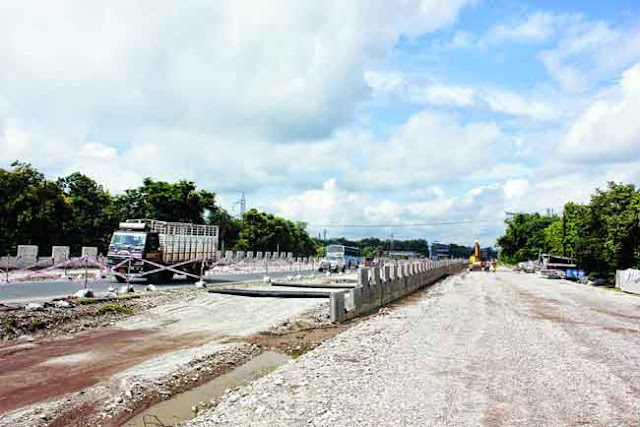