An army truck scythed through a 300-metre stretch of Burdwan Road in Siliguri yesterday afternoon, knocking down a rickshaw, a hand-pulled cart and two bicycles, ramming into a car and ploughing into pedestrians.

The man who pulled the cart died and seven persons were injured. Police have arrested the driver of the truck that screeched to a halt after hitting a roadside eatery.

All the injured, including three women, were taken to the Siliguri district hospital where they are under treatment.

Witnesses said the truck was heading towards Jalpai More from Airview More.

"It crossed the Spencer building which houses a major retail outlet. The truck then took a U-turn and moved on the other side of the double-lane Burdwan Road. Suddenly, it swerved and also hit a rickshaw. Then, it knocked down two bicycles and a hand-pulled cart ( thela) and hit a Wagon R from behind. A number of people who were walking along the road were injured. The truck hit a food stall which is beside the road and came to a halt," said M.D. Anthony, a local resident.

Asked about the injured people, he said while some were moving on bicycles or pulling the cart, others were either seated in the car or were walking along the road.

The local people took the injured to the hospital. Doctors examined them and pronounced Lalu Roy, 48, brought-dead. Roy, a resident of Maharaja Colony here, was pulling the cart.

"All of them have multiple injuries to the head, limbs and back. They are under treatment," said a doctor.

Sakir Khan, another witness, said: "We were surprised to see that the truck driver did not slam the brake and the vehicle kept on moving, hitting people one after another along a 300-metre stretch. We want police to find out why the driver did not stop the vehicle. If there was any technical snag, then he could have taken the truck along the right side of the road where it would have stopped after hitting road dividers. That would have saved the cart puller."

The local people raised a road blockade at the spot after the accident. As hundreds of people assembled and demanded exemplary punishment of the driver, a posse of policemen arrived and brought the situation under control.

The blockade continued for 45 minutes.

Mrinal Majumdar, the additional deputy commissioner of Siliguri Metropolitan Police, said the driver had been arrested. "The vehicle has also been seized. We are in touch with the army and trying to obtain more details. An investigation has begun to find out whether the accident has occurred because of a technical problem or any other reason. Traffic has become normal along Burdwan Road," he said.

Mayor Asok Bhattacharya and Trinamul leaders Nantu Paul and Ranjan Sarkar visited the hospital and spoke to the doctors about the condition of the injured. 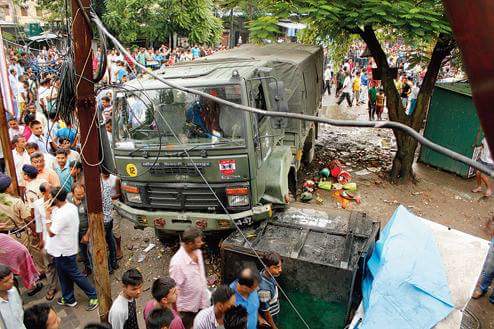