Soumyajit Ghosh - The Son of Siliguri 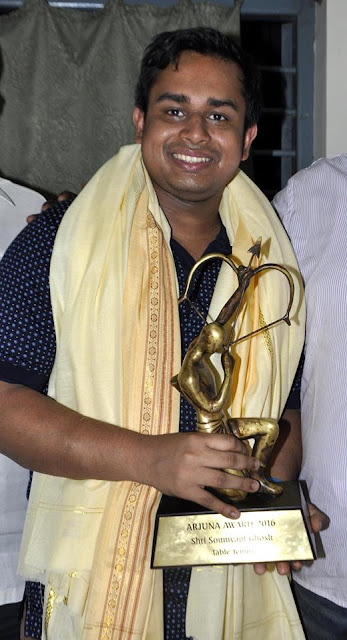 Table tennis player Soumyajit Ghosh arrived at Siliguri from New Delhi on Tuesday, a day after he was conferred with the Arjuna Award by President Pranab Mukherjee. The paddler, who represented the country in the Rio Olympics, was welcomed by 300-odd youths at Bagdogra airport. The third Arjuna awardee from the town was then taken to the Siliguri Municipal Corporation building in an open jeep escorted by 100-odd motorcycles.
At the SMC, the 23-year-old paddler was felicitated by mayor Asok Bhattacharya and others. He was presented with a cheque of Rs 25,000, a certificate and a memento. "I am overwhelmed to see the people who welcomed me. Such appreciation would encourage me to perform better. I am focusing on the Commonwealth Games that would be held in Australia in 2018 and the Tokyo Olympics of 2020," said the resident of Ghoshpara in ward 17. Pic: Tapan Das
Siliguri