Meet Lalitha Kanwar, Joined Indian Army As A Tribute To Her Martyred Father 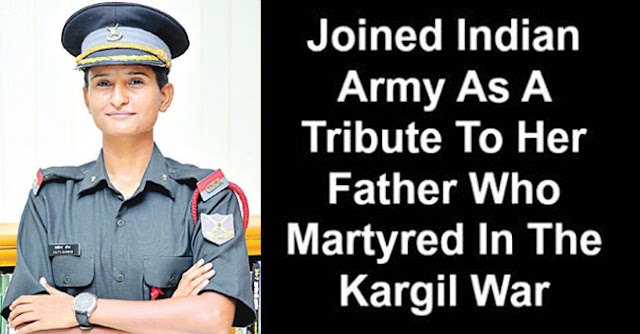 Kargil war hero’s daughter Lalitha Kanwar’s eyes would be eagerly searching for her grandmother during the September 10 Passing out Parade of the Officers Training Academy, as she will be fulfilling her mother’s dream of “returning her son back to her.” Dressed in olive green, Lalitha, the daughter of Naik Rajvir Dan of the 15 Grenadiers, who lost his life on June 21, 2000, during Operation Rakshak in Kargil, told Express that the death of her father came as a massive blow to the family belonging to the male-dominated traditional Charan community at Nagaur in Rajasthan, where women are confined to the kitchen.
Lalitha was seven when the coffin of her father, draped in the Tricolour, was brought to her village in Nagaur. “My sister told me he won’t be coming back. But, I hardly knew what she meant. I was awestruck as visitors poured into our home. For me, it was less of sorrow and more of pride. I wanted to be like him,” she said. But then things did not go well after the demise of her father. “Once the bread-winner of the family is no more, the family is lost as they don’t know what to do. I have a brother and two sisters. My mother raised me like a boy and there was opposition from the community which felt that the place for a woman was the kitchen. My mother fought back against the stereotypes but could not do it for long and we left our village for Jaipur,” recalls Lalitha.
“My mother nurtured me as she saw my father’s character in me. My brother was shy. Her goal was to nurture me and return me to my grandmother as her son. Now I have realised that dream,” says Lalitha. However, she won’t have a chance to be at the combat zone. “I would love to be in the combat zone but then we have a policy to which we must adhere,” she says. source:newindianexpress
National